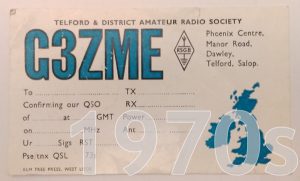 The following information was supplied by Peter Sherwood G4AUY, additional information has been received from Dave Morris GM3YEW as indicated.

The old Wrekin Amateur Club had ceased long before 1969. I was attending the Wellington Tech College and in the Radio Amateur class were Ray Collins (an Irish man), Jack Mannion (manager of Boots the Chemist), and myself.

We had the idea of forming a new radio club. I knew Brian Oliver (a friend of mine) would also be interested. Brian at this time was not licensed. George Shepherd and Bill Duckett were licenced. I rang them to put forward the idea of restarting the Radio Club. The first meeting of the original four people took place at the Wren’s Nest public house in Ketley (Jack Mannion) (Brian Oliver) (Ray Collins ) (Peter Sherwood).

We knew there were more people in the area willing to start a club, so we decided to put an advert in the Wellington Journal. Brian Oliver’s father was caretaker at the Labour Rooms, down the side of the railway, just off Church Rd. The advert said people interested in forming a Radio Club should meet there. It was early in 1969 I can recall.

Even amateurs from the Shrewsbury area turned up; Ken Walker (G8DIR ) and Terry Hall (G8DIQ) came in their black leather motor cycle gear. Bill Duckett, George Shepherd and Dave Morris (G3YEW) came along with other amateurs.

Our first Chairman was Dave Morris. The club venue remained at the Labour rooms for a short while, and so the Wrekin Radio Club was re-born. We moved to the Union Free Church on Constitutional Hill and later, because we wanted to put up antennas, we moved to Ketley Bank School.

GM3YEW states …..I think that the first meeting that I attended was above the Bacchus (if not, very near to it). I was not the Chairman, but the secretary of the original club – I can’t remember who was chairman, but it may have been Mike Davis G4AUZ. Ray Johnstone (G3XQL) was also involved in the early meetings, but I don’t think he took office.

I remember arranging many visits to local (and not so local) establishments – BBC Wooferton and the MEB control rooms stand out in my memory. After the MEB visit we were invited to Graham Blakeley’s (G4CBM) QTH in Bayston Hill for butties. Many of the junior members parents were concerned unknown location and late return to Wellington (Blame Margaret (G4YKX). I moved to GM in 1970 (I think) and, for my sins was made an honorary member of the club.

As I recall we had a long wire aerial and a Mini-mitter transmitter loaned by Bill Duddel (G4PUL).

Later on we moved to the Phoenix School, Dawley. It was whilst there that we decided to change the name of the club to Telford and District Amateur Radio Society, and then followed a further move to Dawley Bank buildings and finally to our QTH at Little Wenlock Village Hall.

The holders of call signs G8BKF and G8BKH met other radio amateurs from the Wellington area at the Morris Hall, Wellington,  on Wednesday to form a radio amateurs’ club.
Mr. William Duckett (G8BKF), and Mr. George Sheppard (G8BKH), both of Wellington, organised the meeting because they felt local amateurs should be able to meet face to face instead of  just over the air.
The 15 members of the new club already have plans for the future. Mr. Duckett said: “We decided to draw up a programme of informal meetings, lectures, Morse practice and constructional  projects.  Our emphasis is to be on training novices to pass the City and Guilds Radio Amateurs’ examination so that they can get licences to operate equipment. Then, for about £50, they can start transmitting.”
He is mainly interested in the V.H.F. bands which allow contact only over a comparatively short distance. But he has contacted stations all over Great Britain and says it is also possible to contact continental stations in good conditions.

We (TDARS) took a risk last year, a necessary risk in moving away from the popular location at Enginuity Coalbrookdale

Under a Fiver Competition 2020 on February 26

Any cookies that may not be particularly necessary for the website to function and is used specifically to collect user personal data via analytics, ads, other embedded contents are termed as non-necessary cookies. It is mandatory to procure user consent prior to running these cookies on your website.